What might be the biggest sacrifice ? Who is the person can sacrifice anything for the sake of just a smile? Yes it’s Father.

We all know that mother is the strongest person in the world. But do you know that father is the one who sacrifices his own dreams for the sake of his family!

It’s not a just a word but there is a huge feeling in it. For girls father is their first hero and first love but for boys, he is a hidden hero and first guide. Most of you don’t recognise the hurdles that fathers face just to make you smile at the end of the day.

Just like you, fathers will also have dreams to achieve. They will have planed something for future, but when it comes to something you need to buy, he sacrifices all his dreams just to get you the item or thing. He never lets you know that he was dreaming to get something for himself.

Mothers are the one who work day and night without any off or leave but same goes to fathers. They need to keep working just to make you free from burden and keep you happy. Mothers express their feelings to children but fathers never open up.

He is the only person who always keeps his problems and worries to himself and only shares the happiness. The biggest sacrifice is nothing but giving up their dreams which fathers do without even thinking for more than one second.

When a man gets married, he starts to feel the change in him. He becomes the head of the family and all the burden starts upon him. He never let anyone know the struggles he is facing instead he always smiles back at his children.

To feed the family and take care of the children, he starts working more and more. He even sacrifices the daily things he wants to buy just to make sure his children are getting everything they need. He wears the same dress again and again so that you can buy more clothes with the money. 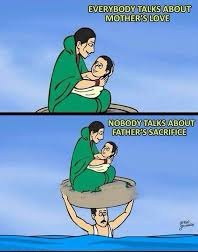 He may ride a regular bike or sometimes even don’t buy one just to get you the vehicle you like. Fathers have always been so generous and helping, but most of them hate fathers because they don’t buy you what you want immediately.

Most of them don’t even talk to him because he is strict. Some feel shy to even sit beside him. What’s the shyness in being with your own father? It’s the attachment. He gives up all the attachments that are to be made when you are small because he was busy working to make up your future.

Be with your father and talk to him regularly. Now it’s your time to take care of him and his needs. Most of them don’t even have father, those who have please take care of them regularly. They might not open up but it’s your duty to be with them.

The second strongest person in ones life and the most sacrificial person.